Difference between evaporation and boiling

It is a process in which different liquids turn into vapors. For Example, water evaporates from the soil and changes into a gas. Difference between evaporation and boiling Evaporation takes place slowly, and there are no stages in the process. This process is the opposite of condensation.

Boiling represents the fast vaporization of any liquid. This process takes place when a liquid is heated to its boiling point, and boiling occurs in three different stages:

Difference Between Evaporation and Boiling

Both evaporation and boiling involve changing liquid into a gas, but there are many differences between them. Some of them are as follows: 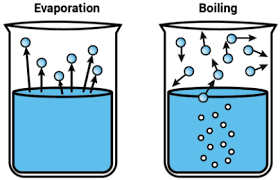 Evaporation is an unhurried process, but the process of boiling is faster. Take a glass of water and measure the height of the water in it. After some days the level of water will change. This change in water level will take place due to evaporation. In contrast, it is possible to boil water on a hot plate and observe the decrease in the water level within a few minutes, rather than the days and weeks.

A liquid has the potential to evaporate at any temperature above freezing. In the previous example, the water slowly evaporated at room temperature, but it would have evaporated faster if the water was warmer. On the other hand, boiling occurs when the liquid reaches a certain temperature, known as its boiling point. The boiling point in the case of water at sea level is 100°C OR 212°F.

The process of Evaporation does not involve the creation of bubbles. Whenever any liquid evaporates, all of its molecules leave the liquid and become a part of the air after a few moments. So in the process of evaporation, the net transfer of water molecules from the liquid to the air takes place. Alternatively, boiling water changes into gas so rapidly that bubbles of water vapor form.

Location of the change to a gas: Difference between evaporation and boiling

It is a noticeable phenomenon that when you heat water to bring it to boiling, bubbles will form on the bottom of the pot at first because the bottom of the pot becomes hot enough to heat the water to the boiling point and then change it to a gas. But after some time, the entire pot of water will be at the boiling point, which is 100°C, and bubbles will form throughout the bulk of the water. But this is not the case with Evaporation which occurs only at the surface of the water.

The process of Boiling generally needs an external source of energy, such as the burner. Evaporation, on the other hand, uses the energy which is already present in the liquid. If there is a puddle of water, it has some heat energy, which habitually comes from the environment. The heat in that water will force molecules to move fast enough to escape into the air. No supplementary source of energy will be required for the evaporation of puddle water. But then again, boiling does not generally happen naturally. It is mandatory to deliberately heat the liquid to boil to change into a gas form.