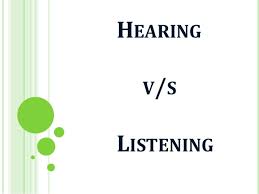 We are hearing and listening to the words are not the same things. There are some ultimate differences between them. The process of Listening can be more complex as compared to hearing, but it’s significant to have people in our lives who listen to us, and we can listen to them in return.

Some of the significant differences between hearing and listening are as follows:

The process of hearing

Hearing can be defined as: “the process, function or power of perceiving different kinds of sound with diverse frequencies.” Many times people hear something, they are aware of the noise or sound it makes, but they don’t necessarily interpret or make sense of it. Hearing is a physiological activity that is related to the physical biology of human beings. Sometimes people also hear things subconsciously. It’s not always within their conscious control.

The process of listening

On the other hand, Listening can be defined as a process “to pay attention to sound” or “to hear something. To listen, it is compulsory to interpret the sound that we hear. People pay attention to sounds, process them, and in the end, try to make sense of them. It’s a mindful, psychological process. 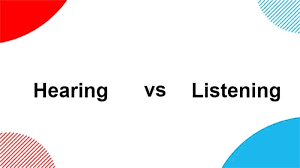 The science of hearing

The process of hearing involves the following steps:

The science of listening: Difference between hearing and listening

The procedure of listening comprises the following steps: